Email ThisBlogThis!Share to TwitterShare to FacebookShare to Pinterest
Labels: other, the kids

Just wait until she can write words.
No comments:

Email ThisBlogThis!Share to TwitterShare to FacebookShare to Pinterest
Labels: artifact, the Kid 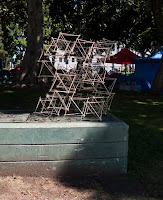 I went to Occupy LA and left with a lot to think about. What struck me visually, however, was this.
No comments: 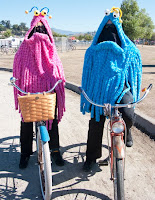 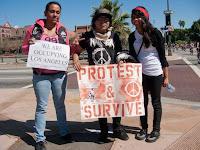 "Hear Nothing, See Nothing, Say Nothing" by the British punk band Discharge made a big impression on me when I was in 10th grade. The music was heavier and harsher than any of the SoCal and DC punk I was listening to at the time, and the concerns were not about hurt feelings but rather nuclear holocaust. We were sure it was imminent.

The most powerful song on that album was "Protest and Survive." The title says it all. In the context of the brutality of Discharge's sound, I found the message surprisingly positive. This weekend I was happy to find out high school students are still listening and being influenced by it. When I saw these kids leaving the Occupy LA protest at City Hall and asked if the sign had anything to do with the Discharge song I got a huge smile in response. And this photo.
No comments: 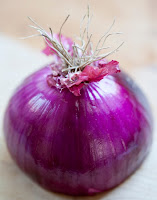